It was fun to volunteer for today’s sessions at Apache Big Data 2016. My responsibilites included helping the speakers setup their laptops and introduce them to the audience, keep time and remind them when time was running short, and finally helping out with the Q&A at the end. I also liveblogged the sessions via twitter and interacted with the speakers as most of the sessions were of my choice as the volunteer team had a shared spreadsheet on which we could choose our sessions in a first come first serve manner.

The day began with the Keynote sessions at 9:30. Rich Bowen started the conference with his opening remarks followed by Stephan Ewen and Alan Gates who gave their talks. 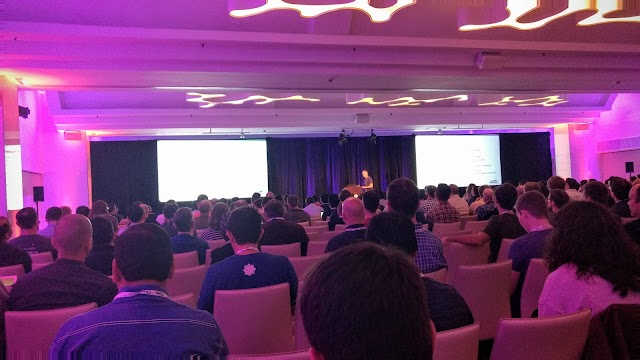 A small coffee break followed the keynote in which the TAC team met and all us of started to prepare for the breakout sessions that run in parallel in different conference rooms.

The first session I attended was about Apache Gearpump. It’s an interesting project and is a realtime big data streaming engine.

The second session was interesting and I got to learn a lot more about Apache Solr. I learnt about Faceting which was new to me and I feel would be very useful for projects that use Solr. Even Apache Allura might be able to use it somewhere, but for this I will have to think where it can be used.

The next session was one which I was very interested in as I had worked on a similar project called Blip. I talked to the presenter, Thomas Burgess and told him about it as well. Their company, indoo.rs has works on the same thing of providing indoor positioning services. They have even deployed it in San Francisco Airport. Right now they are researching about the same and trying to find new ways using Big Data analytics to reduce the time it takes to deploy these solutions and wish to create ways to make the process automated. They are also looking into using some seed data points and then extrapolating them using crowdsourcing. Hopefully, I will try to get in touch with them and discuss the research that is going on at our University regarding the same.

Talk on Crowd Learning for Indoor Navigation by @thomastburgess going on at Carmona at @ApacheCon #apachebigdata pic.twitter.com/IY6MoHrkhl

Next, was a talk by Tim Park from Microsoft. I did not anticipate that this would turn out to be one of my favorite talks of today’s sessions since I had not read much about what was going to be talked about in this talk. It turned out to be great for me as I got to learn a lot and was able to connect the dots.

Talk on "Processing Planetary Sized Datasets" by @timpark is going on in Carmona at @ApacheCon Seville #apachebigdata pic.twitter.com/uLgZbQFA5A

Since, the previous session ended a bit early, I was able to goto the central banquet area where I was able to socilize with a few Apache people like Jean-Frederic Clere and talked about the Bar Camp. Also, talked to some of the speakers and atendees that I had interacted with during the events.

Afterwards, the last session I attended was about Druid and Apache Hive. It was also pretty good, but I did not have much knowledge about what was being covered. Although, looking at the demonstration I was able to figure out what had been discussed earlier and the benefits.

Talk on "Interactive Analytics at Scale in Apache Hive using Druid" by @jcamachor is going on in Arenal 3/4 at @ApacheCon #apachebigdata pic.twitter.com/iOzTt1TYYa